All the windows in the community centre, except one, were replaced with modern double-glazed windows. This was a total of 18 windows. The funding would not stretch to replace a large arched window, and therefore this was fitted with secondary glazing, a broken pane was also fixed. 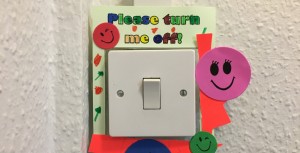 An Energy Week was held at the centre on 26 Mar – 1 April 2017. Windmill Hill Boys’ and Girls’ Brigade group held an energy session talking about saving energy and completing puzzles and games on the topic. The Beavers (Windmill Hill Scouts) held an energy session focused on what energy is, how electricity is made and how we can save electricity. They made light switch plates, which have been put up around the building to remind people to turn off lights when not in use. Their monthly quiz on 31 Mar was focused on energy saving and switching, with around 40 local people attending. Throughout the week, there were three large display areas with information on energy saving and switching – one in the entrance and one in each hall. These reached the centre’s regular weekly users (around 200), plus quiz attendees (around 40 this month) and those attending a one-off concert on Sat 1 April (around 150).

The Community Centre is now more energy efficient and able to run on lower heating costs. This will contribute to its effectiveness as a community facility and its resilience to future financial challenges. An estimated 0.5-2 tonnes CO2 per year and up to £80 per month will be saved on their heating bills in winter. Also, the project provides an example to those using the community centre of how relatively inexpensive measures can save energy and costs. They have reached a large range of local people with energy saving and switching messages, primarily middle-aged and older people, plus children in their youth groups.

They received many comments from users of the centre who were impressed by the centre’s energy savings and who said that it had given them ideas to carry out similar measures at home. They also spoke to several users who had not previously considered switching energy suppliers.

“The new windows should continue to perform for at least 20 years, with an ongoing impact on the Community Centre’s energy efficiency and energy costs. The upgrade to the windows should also help ensure that our appeal as a hire venue continues to stay strong, bringing in much of our income and keeping the Centre self-sufficient and entirely community-focused. We hope that having managed a grant of this size successfully will contribute to the Community Centre’s ability to secure funding from other sources for future projects”.