Ambition Lawrence Weston were granted £5,000 from Bristol Community Energy Fund in round 1 which was match funded by Low Carbon Gordano Community Benefit Fund. The grant was used to fund a community internship programme, with local long-term unemployed people working on various community energy projects in the Lawrence Weston area.

Four interns were selected out of ten expressions of interest. Following an interview process all were identified as long-term unemployed or in temporary employment. The interns took part in an 8-week programme, consisting of the following sessions: 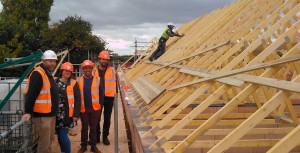 Ambition Lawrence Weston have made fantastic progress with the internship, with interns undertaking many activities such as a solar panel workshop, community energy engagement days, surveying the community for views on a community-led wind project, community building audits, thermal imaging training, surveying of community buildings and domestic energy assessments.

The interns have gained useful skills; as well as attending the course, they have been able to take up other opportunities that have arisen directly as a result of the internship. The internship covered a broad range of activities giving the interns the experience necessary to reach their community, enabling them to save money on energy bills and benefit from community-led renewable energy.

Over the course of the internship they interviewed over 50 residents to understand the community’s needs and interest in developing community-led renewables. They also developed a community engagement plan, including designing interview questions and distributing leaflets reaching over 3,200 households. Interns expressed that they felt empowered and that the programme “opened their eyes to new opportunities of work”. Interns came away with better understanding of community energy, fuel poverty, energy saving, and renewable energy, giving them confidence in their skills and abilities. All interns have maintained contact with the project.

The energy audit interns carried out at Avonmouth Community Centre had a real impact. The centre manager now has a good understanding of the heating controls, which will result in lower bills. One of the interns wrote a report with recommendations on how to make the building more energy efficient, which the Centre are now following up.

Read about James, one of the interns

James is 24 and has lived in Lawrence Weston is whole life. He had not previously been involved with Ambition Lawrence Weston. After leaving school has only worked in temporary jobs and unemployed for several years and felt nervous about starting a new position.he internship has had a huge positive impact on his life. James explained:

“My confidence has massively improved. I’ve done things I thought I could never do.”

James took on the role of communications for the duration of the internship, designing a logo for the energy project, setting up mobile phone software to enable him to text people reminders about events who didn’t have access to a computer, setting up Facebook group, and Twitter account.

“I got the chance to use skills that I don’t often use, like graphic design, and also learned about the effects of fuel poverty in my community and how much they could be saving with our help”

James has since gone on to shadow Bristol Energy Services (Bristol City Council) Communications Team and designed a Warm Up Bristol advert. He continues to volunteer for Ambition Lawrence Weston was offered full-time employment following completion of the internship. Before going for the interview, he said:

This project was a pilot project and has provided the evidence for potential funders so that it can be repeated in future.  Ambition Lawrence Weston plan to extend the pilot in 2018 and are making good progress on developing a community-led wind turbine.