Re:work is a charity in South Bristol. They work to relieve poverty among the residents of the area through advancing education, especially for young and unemployed people, and by promoting and providing training, such as skills that would help residents obtain paid employment. Six out of eight areas in Knowle West are ranked as being economically deprived.

Re:work received £10,000 in Round 1 and a further £6,000 in Round 3. The initial grant was used to employ 2 part-time staff to carry out energy assessments and undertake improvement works in 50 homes in Knowle West, focusing on switching suppliers, insulation and fixing any problems in their homes that make it expensive to heat, such as draught-proofing. The work aims to help local residents reduce their energy bills. The second grant was to support the continuation of the project, which is named ‘re:draught’.

As a result of the first round of funding, over fifty families across Knowle West received help enabling them to better manage their energy consumption. Of those families, twenty households were helped to investigate cheaper suppliers with nine households switching providers, forty-seven households undertook an energy survey, thirty-two homes applied for water saving kits, twenty-eight homes switched to low energy lightbulbs, sixty individuals were signposted to further help and draught excluders were provided for thirty-nine doors. 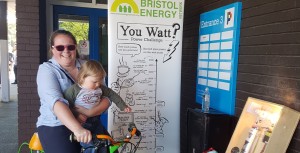 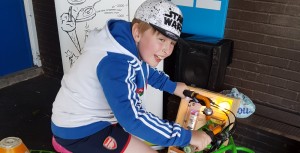 Re:work developed a method of working with families with low understanding of why switching energy providers is a good idea. Vicky Beckwith of Rework said:

“We have built a stronger understanding of the structural problems found in Bristol’s 1930s red brick estates that lead to wasted energy. We have shared that understanding with groups across the city. It is difficult for someone who is enmeshed in the debate about energy supply and provision to understand that this is a paradigm that a large number of people who live in Bristol have neither the time nor the energy to investigate. This results in families, who live in considerable poverty, having to pay more for their utilities”.

Re:work found that 17% of participants did not have access to the internet at home and all of that group paid for their energy by key meter. The average annual household saving was £259 and the range ran for £22 to £1,182. The team talked to people about their energy consumption through pop-up workshops and in their own homes through home visits. One person who received advice from Re:work, Jane, explained:

”Heather’s help with using the comparison websites, comparing the different tariffs and getting a deal that was right for me was invaluable. I would not have done it on my own” Debbie, another person benefiting from the project, said “having some draught-proofing work done on my house has made my home warmer and the energy-efficient light bulbs that I was given will save me money. A great improvement for me and my family. The water kit that was sent through from Bristol Water was very useful. Another money and water saving device we didn’t know were available. Rework gave me lots of useful information”.

Holding stalls and activities at local events helped to overcome the challenge of engaging people in a topic that people sometimes struggle to relate to and as such do not see as a priority in their lives.  Re:work arranged local pop-up workshops in busy areas and used a bike that used pedal-power to operate a smoothie maker and play music, to attract people’s attention.

Many of the people Re:work talked to about switching energy providers were not confident using IT. They were concerned about the number of sales emails they received after signing up to a comparison website, so Re:Work set them up a new email account to get around the problem. Many others did not have an  email account beforehand. Whilst talking to people about energy providers, it became apparent that different comparison sites came up with different saving, sometimes for the same company, and occasionally the recommendation was for providers neither Re:work or the person receiving advice had heard of. This meant extra investigations were needed to give assurance that switching was a good idea. It took a minimum of 4 home visits to talk someone through the switching process.

A couple in their early 20s sought help from Re:work during the project. They were both on low incomes, renting a small flat from a private landlord and paying their energy bills by key meter. They didn’t have internet at home and were not confident using IT. During their first appointment, the Re:work builder (Geoff) assessed what work needed doing while their support worker, Heather, helped them gather data for the energy provider comparison websites. During the second appointment Geoff carried out improvements to the house to make it more energy efficient and warmer, whilst Heather talked them through the results from the comparison sites. Heather also called their supplier to find out information about switching to direct debit. The couple benefited from the home improvements and also switched supplier, they are still looking into paying by direct debit rather than key meter.

The second round of funding is just coming to a close. Re:work has supported a further 50 households and found a much greater willingness to switch supplier.

Re:work have ambitions of continuing with the re:draught project. They hope to develop it in partnership with Cold Homes Energy Efficiency Survey Experts (CHEESE) who use thermal imaging surveys to help people address issues in the home where heat is being lost. The colourful thermal images are a very visual method of starting discussions around energy waste. So far, two members of Re:work staff have completed phase 1 of the CHEESE training, the energy project when funding is secured.